Diamond is the hardest natural mineral known to planet Earth, comprised of pure carbon. It is April’s birthstone, as well as the popular gift for 60-year anniversaries.

Today, diamond is considered the most popular gemstone for several reasons, including its durability, brilliance and prestige.

Originating from the ancient Greek word “adámas”, meaning “unbreakable” or “unalterable”, diamond is one of the leading gemstones in the market. Because of its unparalleled mineral strength and high dispersion of light, this widely known stone is not only desirable for jewelry pieces, but also for industrial applications.

Diamond stones have been sought after for centuries, dating back to the 400 B.C. Originally traded from India to regions to the east and west of its borders, these dazzling gems were quickly spread throughout the world, especially after the discovery of the stone in Brazil in 1725.

In the 1860s in Kimberley, South Africa, standardized diamond mining began. This was where the first large-scale diamond mine was used, and it uncovered the first discovered diamond in that region in 1866. It quickly earned the name Eureka Diamond.

When an even larger diamond was located on the slopes of Colesberg Kopje in 1869, it created an immediate rush within a month. During 1871 through 1914, nearly 50,000 miners dug up the area completely, producing 2,722 kilograms of diamonds. Almost instantly, Kimberley became the second largest town in South Africa with its new population of 40,000.

Currently, rough diamond production from around the globe is measured at about 130 million carats annually, of which an estimated 92% is cut and polished in India. Approximately 85% of the world's rough diamonds, 50% of cut diamonds, and 40% of industrial diamonds are exchanged in Antwerp, Belgium, which is considered the diamond center of the world.

With 21st-century technologies that produce perfectly synthetic diamonds, the stones are now essentially identical to naturally occurring mined ones. Synthetic stones now make up about 2% of the diamond supply used for jewelry, but 98% of the industrial-quality supply is utilized for abrasive applications. 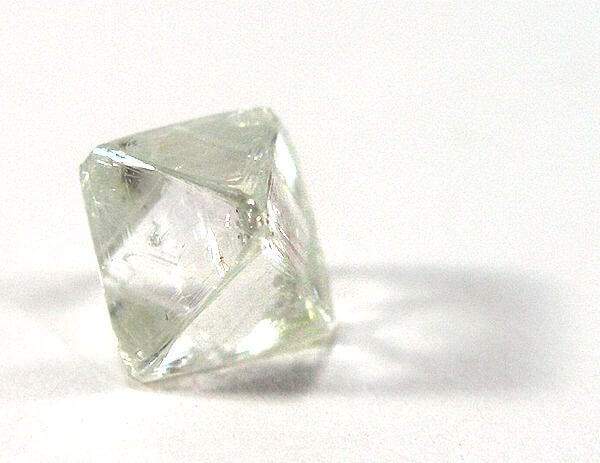 An optically isotropic crystal that ranges from translucent to opaque, diamond is the most durable natural material known to mankind. The stones are formed in the Earth's mantle – the layer beneath the crust or surface layer – at a depth of about 150 km. Diamond crystallizes in the diamond cubic system, and are made up of tetrahedral, covalently bonded atoms of carbon.

Rated a 10 on the Mohs scale of mineral hardness (the highest number possible), it possesses a high refractive index of 2.417 and moderate dispersion of 0.044. Most are electrical insulators, yet are also exceptional conductors of heat.

In nature, diamond is lipophilic and hydrophobic, meaning its surface can’t be made wet by water, but can be easily wet and stuck by oil. This property can be used to extract diamonds with oil when producing synthetic diamonds. Diamond surfaces that are chemically modified with some specific ions, however, can become so hydrophilic that they can stabilize several layers of water ice at the body temperature of a human.

Although diamonds have been located in many locations around the globe, the majority of rough diamond production (an estimated 92%) is completed in India. Other localities include Brazil, Borneo, Botswana, South Africa, Venezuela, Australia, Congo, Angola, Guinea, Sierra Leone, and Russia.