For someone close to you with a July birthday, ruby birthstone jewelry makes a wonderful gift that will continue to be meaningful throughout their lifetime. Learn about this precious stone and why a ruby of quality can make such a valuable gift.

Named for the Latin word ruber—meaning “red,” ruby is considered to be the king of gems and represents love, passion, and good fortune.

In ancient Indian philosophy, rubies and ruby birthstone jewelry were thought to be connected to the life force blood and were used to provide power and youthful energy to the wearer. Burmese warriors wore ruby gemstones to make them unbeatable in battle and medieval Europeans adorned themselves with ruby jewelry in the hope of having greater success in love. Mystics throughout the centuries have believed that rubies can warn the wearer of imminent danger or misfortune. The gem has also been used in traditional medicine to soothe inflammation and calm anger.

A variety of corundum (along with sapphire), ruby derives its deep red color from the presence of the element known as chromium. The more chromium in the stone, the deeper and stronger the color.

Rating nine on the Mohs hardness scale, ruby closely follows diamond and moissanite as the third strongest and most scratch-resistant gem on Earth. Because of its excellent durability, ruby birthstone jewelry—such as a ruby everyday ring—can be worn to provide inspiration and vitality throughout the day.

Due to natural “silk-like” inclusions present in most rubies, natural ruby gemstones are often subjected to heat treatments before being cut, polished, and mounted. Exposure to high temperatures can also help to remove hints of purple from the stone for a clearer, more vivid red.

Rubies with small cracks will sometimes be filled with glass to maintain their transparency. However, this can weaken the finished gem. To take care of treated ruby birthstone jewelry and help your ruby’s quality to last for a lifetime, we recommend cleaning your ring with mild, soapy water and polishing it with a lint-free cloth. You can also take advantage of our lifetime warranty for professional cleaning and servicing at AZEERA.

Where Rubies Are Found 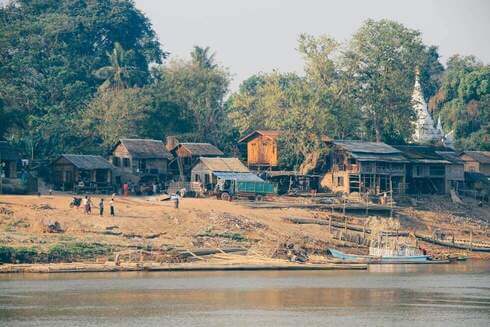 Formed in igneous, metamorphic, and sedimentary rocks, ruby birthstone jewelry is sourced from the site of ancient flows of magma and basalt. Due to ruby’s hardness and durability, this gemstone persists in the sediment after other weaker minerals have been destroyed. Over time, sediments containing corundum have been carried away from their initial locations via rivers and streams, leaving alluvial deposits of ruby in places like Cambodia, Vietnam, Thailand, Myanmar (Burma), India, Sri Lanka, Afghanistan, and Montana. Other important producers of rubies include Tanzania, Kenya, Nigeria, Malawi, and Madagascar.

At AZEERA, we are committed to sourcing only the top 1% of gemstones from conflict-free mining companies that are not implicated in forced, slave, or child labor. Traditionally, the ruby mine in Mogok, Myanmar, produced some of the finest rubies in existence, displaying a unique vibrancy and fluorescent glow. However, as many of these rubies have been used to fund violence against ethnic minorities, we do not deal in Burmese rubies and only make ruby birthstone jewelry with stones produced by suppliers our families have known and trusted for generations.

When creating ruby birthstone jewelry, we recommend pairing this passionate gemstone with rose gold for a spectacular, heirloom-quality ring, or with white gold or platinum for a contrast that makes your ruby pop. Large-carat rubies tend to be on the pricier side, so if budget is an issue, consider going for a halo setting in which your quality ruby is surrounded by diamond pavé—making your stone appear larger than it actually is. You can also place a ruby as the center stone in a three-stone setting with pink tourmalines or garnets on either side. Once you begin to experiment with metal and gemstone combinations, the possibilities really are endless!

Would you love to have your own ruby birthstone jewelry but weren’t born in July? Traditionally, this beautiful and coveted stone is also given as a gift for 15th and 40th wedding anniversaries—and can simply be worn because you are attracted to the stone and want more love, passion, and power in your life. Browse our ruby gemstone rings online or talk with our founders about the possibility of creating your very own ruby custom ring, engagement ring, or cufflink set today.