Composed of a form of quartz known as chalcedony, onyx is named after the Greek word for “claw” or “fingernail” thanks to the white and yellow veins observed in onyx marble. True onyx is a silicate mineral with parallel black and white bands that can also be found in the solid black color we use at AZEERA.

Sardonyx—the red and white variety of this mineral—is the traditional birthstone for the month of August and also holds an important place in gemstone astrology. However, as we specialize in black onyx, we will focus on this variety of the onyx birthstone.

The History, Symbolism, and Meaning of the Black Onyx Stone The Legend of Cupid and Venus

According to Indian mythology, the goddess Venus (Rati) was found deep in slumber on the banks of the Indus River when Cupid (Kamadeva) decided to give her a manicure with his magic arrow. As the arrow clipped the fingernails of the sleeping goddess, the pared nails sunk to the bottom of the river and were transformed into the onyx birthstone.

Historically, the onyx birthstone has been used in ornamental carvings and jewelry—with black-and-white onyx cameo gemstones being especially popular. In antiquity, onyx was carved into bases and handles for solid gold objects and engraved in negative relief for use in Roman seals.

Perhaps due to its intense coloring, onyx has traditionally been used as an amulet for protection when fighting in a battle or walking down a dark street at night. In supernatural ceremonies, onyx gemstones were carved with the image of the head of the planet Mars or the god Hercules to protect the person conducting the ritual. Ancient Indians and Persians believed that onyx provided protection against the evil eye and could help a woman to birth more quickly and easily when the stone was placed on her stomach.

When given as a birthstone today, onyx is believed to boost the wearer’s sense of confidence, authority, and ability to be the master of his or her own destiny. It is also said to add more structure to the person’s life and provide wisdom for making good decisions.

In crystal healing circles, the onyx birthstone is believed to increase the strength, stamina, and vigor of the wearer and boost their powers of self-control. It is also said to bring relief where there is tension, worry, and anxiety, and is thought to do away with confusion and nightmares.

Holistic approaches to medicine use onyx as a remedy for ailments involving the feet, blood, and bones—bone marrow in particular. If you suffer from epilepsy or glaucoma, onyx is believed to be helpful for these conditions, too.

Where Black Onyx is Found

In today’s gemstone industry, the onyx birthstone is produced in the largest quantities in Brazil, India, and Uruguay. However, deposits also exist in Peru, Afghanistan, Madagascar, and the U.S. In previous decades, Baja California and northwest Mexico produced significant amounts of onyx. Unfortunately, cheap imitations released in the gemstone market have had a negative impact on these North American centers of onyx production.

Ideas for Your Onyx Birthstone Jewelry

If the black onyx stone and its meaning speak to you, you might like to consider investing in a black onyx gemstone ring or set of black onyx cufflinks. Black onyx looks especially striking when combined with a band of white gold or platinum. Here are our top suggestions for a piece of awe-inspiring black onyx birthstone jewelry: 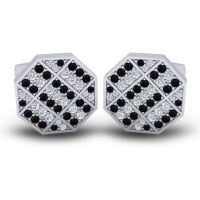 A Set of Black Onyx and Diamond Cufflinks in White Gold

With its geometric patterning and shield-like hexagonal shape, this set of gemstone cufflinks is a strong choice for creating an aura of protection and authority and makes an ideal gift for someone with a Leo birthday or a strong, confident man in your life. 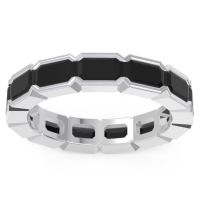 For celebrating a decade of marriage, consider presenting your beloved with an onyx gemstone eternity ring. This setting of emerald-cut black onyx can also be worn as a “power ring” for boosting the wearer’s sense of strength and vigor. 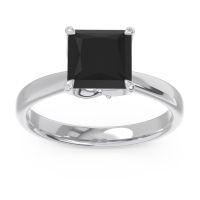 We particularly like this princess-cut black onyx solitaire ring for anyone with a Leo birthday or who feels drawn to the black onyx gemstone in general. Carrying an air of authority and power, this onyx birthstone ring brings back memories of the signet rings of Ancient Rome and is sure to become a source of energy and confidence.

Design the Ring of Your Dreams at AZEERA

A family-owned business based in New York, AZEERA is recreating the local-jeweler experience with the convenience of online shopping. Our handcrafted rings and cufflinks are made with the highest grade of conflict-free gemstones and shipped to you with free, fully-insured US priority shipping.

When purchasing onyx birthstone jewelry for yourself or a loved one, feel free to browse our existing designs and choose the gemstone, style, shape, and metal that appeal to you. You can also request a custom ring with your own design for a unique result that expresses the black onyx stone’s meaning and symbolism. Join us on social media for more gemstone jewelry inspiration and contact our founders to begin creating your black onyx ring today.