Often mistaken for its lookalike, emerald, peridot is gemstone variety of olivine, and has a unique shade of olive green that distinguishes it from others of similar hues.

The term “peridot” may be derived from the Arabic word “faridat,” meaning “gem”, or possibly the Greek word “peridona,” meaning “to give richness.” The classic gemstone is also referred to as three other names: “chrysolite” in Europe, originating from the Greek word meaning "gold stone"; “olivine”, which is the name of its mineral group; and Hawaiite, which is only relevant to peridot that forms in Hawaii.

Peridot has always been associated with light. In ancient Egypt, it was referred to as the “gem of the sun,” believing that it protected its owner from evil spirits in the night. Ancient Romans called peridot the "evening emerald" because even in dim candlelight, the stone still glowed brilliantly.

Some of the earliest records of the gem indicate that the ancient Egyptians were of the first to discover these unique crystals. They were recorded to have mined a gorgeous green gem on an island in the Red Sea called Topazios, which is now known as St. John’s Island, or Zabargad. According to the legend, the island was infested with snakes, which made mining hazardous and risky. Then, when a very innovative pharaoh drove them into the sea, the miners were able to continue collecting the gems again.

Peridot has been a preferred stone among royals and clergymen for many years, used to ornament everything from royals’ crowns to knights’ swords. It's typically eye-clean but may include small black chromite crystals or inclusions that resemble lily pads.

Even from the earliest times, people have often confused this stone with other stones, many times referred to as “topaz.” According to many historians, Cleopatra’s infamous emerald collection might have actually been peridot. For centuries, many referred to the glimmering 200-ct. gemstones decorating the Three Holy Kings shrine in Germany’s Cologne Cathedral as emeralds. However, they are in fact peridot stones. 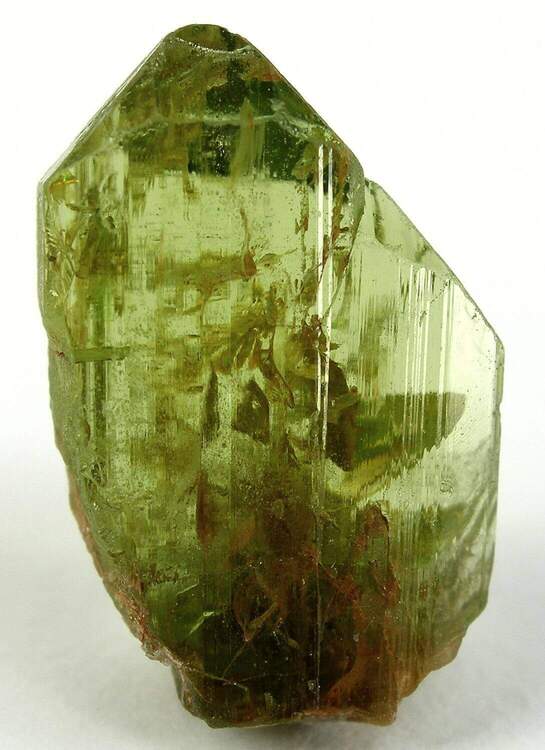 Peridot is the magnesium-rich variety of the gem-quality olivine, which is a silicate mineral. It has a rating of 6.5 to 7 on the Mohs scale of mineral hardness, with fair to good toughness. Peridot’s formula is (Mg, Fe) 2SiO4, and has a refractive index of 1.64 – 1.70.

Some key separations of the stone include its refractive index, birefringence, optic character, spectrum and magnification. High birefringence is often recognizable under magnification by very noticeable doubling of back facets. Its crystal system is orthorhombic, with vertical rhombic faces and side pinacoids. Peridot has a specific gravity of 3.2 – 4.3 and is a member of the olivine isomorphous series with end members known as forsterite (magnesium silicate) and fayalite (iron silicate).

According to the Gemological Institute of America, it’s formed deep inside the earth’s crust and has been brought to its surface by volcanic eruptions. It has also been recorded that some peridot came to earth by means of meteorites, though is very rare and not likely to be seen in any retail jewelry store.

Peridot is most commonly found in the area that borders Pakistan and Afghanistan, though can be found in several other locations around the globe. In fact, the world's finest peridot is mined in Burma (Myanmar) and Pakistan, in the Himalayan range. Conflict in Burma and unsatisfactory weather conditions in Pakistan make peridot from these locations more rare and, consequently, of higher value.

Other localities for peridot include:

The largest cut peridot is 310 carats, located in the Smithsonian Museum in Washington D.C.