For us (the founders of AZEERA), gemstones are much more than a job—they are a lifestyle. From childhood, both of us learnt a great appreciation and respect for the beautiful pieces of jewelry that can be created with the right stone and have seen several ring styles come and go through the ages in which we and our predecessors have lived and designed jewelry.

In this article, we will cover some of the most popular trends in jewelry design and techniques from the last 300 years and explore how you might like to incorporate the ideas from ring styles through the ages when designing your very own engagement or wedding ring. 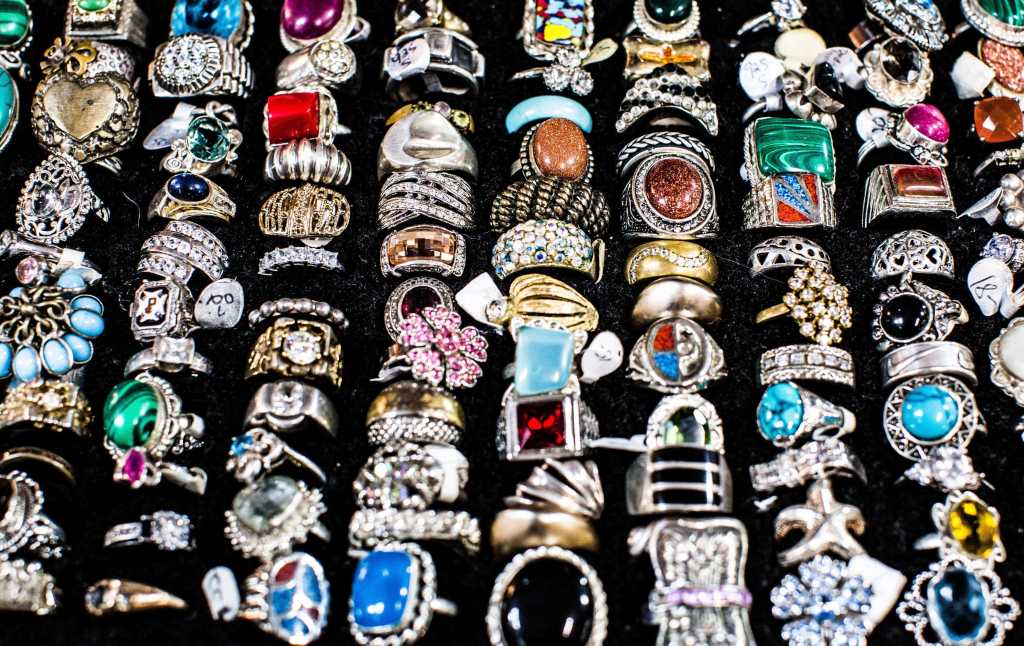 By definition, antique rings are pieces that were designed, made, and worn at least 100 years ago. Today, these rings are a rare find and most antique engagement rings for sale are actually modern replicas of pieces and jewelry-crafting techniques from the 1700s, 1800s, and early 1900s. We will take a look at some of these antique ring styles through the ages, starting from the Georgian era and finishing with the Art Nouveau movement at the turn of the twentieth century.

Named after the Hanoverian Monarchs in England (George I to George IV), Georgian jewelry preceded mechanized factory production and was typically made by hand. These rustic-looking rings were made from 18-karat yellow gold or sterling silver with floral and nature-themed motifs decorated with garnets, topaz, amethysts, and diamonds. When designing a custom ring based on ring styles through the ages, you can create a modern version of a Georgian-period ring with a floral setting and a garnet, amethyst, or diamond gemstone centerpiece set in 18k yellow gold.

Named after Britain’s second longest-reigning queen, Queen Victoria, Victorian-style jewelry continues to be a crowd favorite among ring styles through the ages. Featuring machine-made cut-and-stamp bands and electroplated gold plating, Victorian rings were a testament to the optimism and growing wealth of the common people at the beginning of the industrial revolution. Factory production techniques made lower purities of gold (9, 10, and 14 karats) easier to produce than ever before and this made fine jewelry accessible to the general population.

Take some inspiration from the Victorian era and choose a heart-cut amethyst or garnet gemstone in a cluster or bezel setting with 14k yellow gold. You can also replicate Queen Victoria’s mourning jewelry fashion with a stunning black onyx solitaire ring.

After Queen Victoria’s long and fruitful reign, her son Edward VII took over the throne in 1901. Factory-made jewelry techniques continued to advance, influencing ring styles through the ages by permitting the fabrication of intricate designs from platinum. Milgrain (“thousand grain”) became a popular metalwork technique and some especially delicate engagement rings were so finely constructed that they looked more like lace than metal.

In the Edwardian era, diamonds increased in popularity, followed by sapphires, aquamarines, and Russian green garnets—which in large sizes were especially rare and valuable. You can design your very own Edwardian-inspired ring with a milgrain-detailed platinum ring and the Edwardian-era gemstone of your choice.

During the late Victorian era and all of the Edwardian era, Art Nouveau took innovation in ring styles through the ages to new heights with a resurgence in handcrafted jewelry. Art Nouveau pieces featured nature-inspired shapes such as flowers, insects, and naked female forms (this was quite risqué at the time). Enamel work, opals, sapphires, moonstones, and stained-glass pilque a jour were used in pieces that are still prized for their beauty and creativity today. In our original ring collections, you will find several beautiful floral shapes and AAA-quality blue sapphires that you can work into an Art-Nouveau-inspired custom ring. 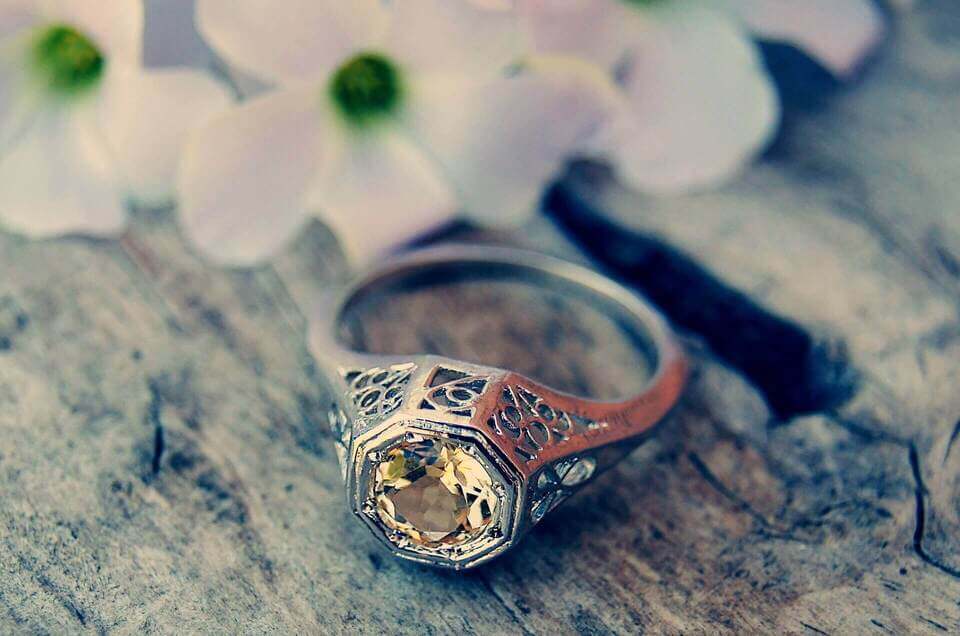 After 1915, the ring styles through the ages that followed have not reached an age to be able to be labeled as “antiques,” as they are still less than 100 years old. However, they do qualify as “vintage.” Many styles used today were inspired by this time period, with influences ranging from Art Deco (spanning the period between the two world wars) to Modern (classified as designs appearing since 1965).

After the end of World War I came the “roaring 20s”—a time for celebration and over-the-top decadence. Lavish adornments with diamonds and pearls that were rarely affordable in ring styles through the previous ages were all the rage at this joyous time.

Early Art Deco period jewelry can be identified by its fine detailing with filigree and engraving and a trend towards floral motifs. Late Art Deco rings were more geometric and linear in their design and were set with the newly-invented synthetic gemstones.

Get your own “roaring (20)20s” party started with a custom ring featuring conflict-free diamonds, intricate filigree metalwork, and a short, engraved message.

Anyone who loves the statement rings of today will be interested to know that “big and bold” was actually a popular style over 80 years ago, during the Retro era of the late 1930s and 1940s. As platinum was needed for the war effort during World War II, jewelers began experimenting with gold alloys and found ways to create rose gold, yellow gold, and “green gold.”

Feminine motifs such as bows, flowers, ruffles, and ribbons were highly prized (as they had been in previous ring styles through the ages), along with intricate illusion settings that made the smaller citrine, aquamarine, and synthetic ruby and sapphire gemstones of the day appear larger than they actually were.

In our exclusive ring collections, you will find a number of large, bold designs that you can combine with high-quality natural citrine, aquamarine, ruby, and blue sapphire gemstones for a Retro-style custom ring.

With wartime over once again, platinum reappeared on the scene of ring styles through the ages and became the metal of choice for designer jewelry. The DeBeers company brought diamonds into the spotlight with their “diamonds are forever” campaign, and these brilliant gemstones made their way even further into the public’s minds and hearts with Marilyn Monroe’s musical number Diamonds Are A Girl’s Best Friend.

With AZEERA, you can relive the glamor and opulence of the 1950s with a diamond ring cast from platinum gold. One of the most expensive and highly-prized combinations, this is the perfect choice if you’re looking for something lavish and have an especially large budget!

Inspired by developments in other areas of the arts at the time, modern-era rings feature abstract and geometric designs in yellow gold, silver, and platinum. The age of space exploration brought on a series of starburst and atomic designs in the 1960s that hadn’t been seen before in ring styles through the ages, while colored gemstones became popular mostly for “evening jewelry.” The most common gemstones used in the early modern period include turquoise, amethyst, cabochon gemstones (which are polished rather than cut), coral, and cultured natural pearls (mainly used in “daytime jewelry”).

Loosely defined as extending up to the current time, a modern ring from the AZEERA collection could include the geometrical motifs and colored gems of the mid-1960s, or more recent techniques such as an asymmetrical, split-shank, or tension setting. Head over to our modern engagement ring and modern wedding ring pages for some fresh inspiration!

Whichever ring styles through the ages speak to you personally, the unmatched quality of the gemstones and workmanship at AZEERA are sure to turn your custom piece into a family heirloom. Take advantage of more than three generations of experience in gemstone jewelry design and create a unique everyday, engagement, or wedding ring that you will be delighted to wear every day of the year. Contact us via our live chat or schedule a callback from our founders to begin!