If you or someone you love was born in January, celebrate the occasion with a beautiful piece of garnet birthstone jewelry. The official birthstone of January, garnet is a gemstone that is available in an abundance of colors—from a deep Bohemian red to vibrant Russian green—and is often associated with abundance and prosperity. Learn more about this exquisite gemstone and discover our most spectacular garnet ring designs.

The History of Garnet

The word garnet is from the Middle English word gernet and literally means “dark red.” If you’ve ever seen the seeds of a freshly-picked pomegranate, you’ll understand how this color got its name!

When compared with other colored gemstones, garnet is one of the most durable—even though it only rates 7-7.5 on the Mohs hardness scale. Historically, this deep red stone was used in the necklaces of Egyptian pharaohs as the “symbol of life” and was also featured in signet rings in 3rd- and 4th-century Rome.

Thanks in no small part to its signature red color, the garnet gemstone has historically been linked with health and prosperity as well as being used for protection against nightmares, accidents, pestilence, and plague. Warriors going into battle would carry garnet gemstones with the belief that the stone would prevent them from being defeated by their enemies. According to Indian astrology, garnet birthstone jewelry can reduce feelings of depression and guilt and boost a sense of mental clarity and self-confidence.

Medicinal uses for the stone are many and varied—with common applications ranging from wound care to inflammatory disease treatment protocols. Garnet birthstone jewelry has even been used for soothing an angry heart—a useful thing after the loss of a friendship or an experience of broken trust.

If you’d like some historical inspiration for custom garnet birthstone jewelry, consider these two nature-inspired examples from jewelry created in the Victorian era:

Now housed in the Smithsonian American Art Museum, an antique pyrope hair comb from the Victorian era has become one of the most well-known pieces of garnet jewelry worldwide. This tiara-like jewel features a large rose-cut garnet at the crest with pyrope (“fiery-eyed”) garnets that were mined in the historic mining areas of Bohemia (located within the borders of the modern nation of Czech Republic).

Another beautiful jewelry design that dates back to this same period (1837-1901) is a motif that features small clusters of red garnets to represent their pomegranate namesake. You could easily simulate this idea in your garnet birthstone jewelry with tiny garnets set around an eternity band or your own custom design of garnets placed in a fruit- or floral-style arrangement.

Where Garnet is Found 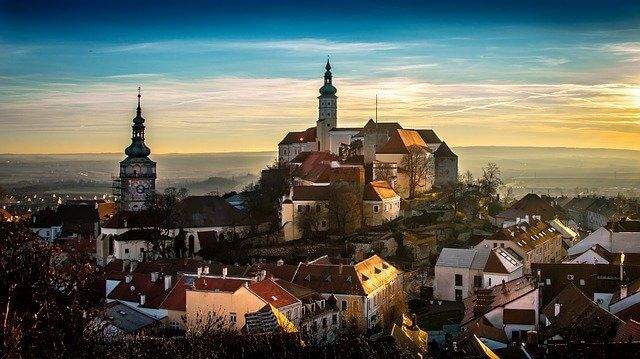 While Victorian red garnet was mined in Bohemia, green demantoid garnets were sourced primarily from the Ural Mountains in Russia and were prized by the Russian royal family and the famous jeweler Peter Carl Fabergé.

Most of the gemstones used in garnet birthstone jewelry today comes from Africa, Myanmar, Brazil, India, Iran, Afghanistan, Pakistan, and Sri Lanka. At AZEERA, we only accept garnets from conflict-free sources that our families have known and trusted for generations. We never deal in conflict gemstones.

In contrast to specific minerals like citrine and ruby, garnet actually refers to a group of minerals that come in every color, but blue is the rarest:

How Garnet Minerals Form in the Earth

As far as these gemstones’ formation, almandine, pyrope, and spessartine are high in aluminum and form at convergent plate boundaries where metamorphism acts on shale (a kind of sedimentary rock). Andradite and grossular are higher in calcium and form along the edges of igneous intrusions where limestone is transformed into marble through contact metamorphism. Red garnets are not usually treated, except for the filling of fractures with a glass-like material.

Garnet birthstone jewelry is easy to design thanks to the stone’s excellent durability and rich, passionate color. Consider these simple but effective ideas for a garnet gemstone or engagement ring:

For an engagement ring that looks as decadent as it feels, try a three-carat oval-cut garnet in a halo of diamonds. A white-gold band will provide a cool contrast to the deep red of the garnet. Alternatively, try a yellow-gold band for a warmer, more traditional look.

The ideal choice for garnet birthstone jewelry, an everyday ring in a petite setting is both affordable and eye-catching. Try a 0.25 CT garnet centerpiece in a braided band of white gold or a smaller 0.17 CT garnet gemstone in a modern split-shank bypass setting.

Celebrate the love of your life and two years of wedded bliss with a garnet and diamond eternity ring. As well as being the birthstone for January, garnet is also the traditional gemstone for a second wedding anniversary. If your bride or groom was born in January, a garnet ring or cufflink set will be twice as meaningful!

An online-only, family business that follows more than three generations in the trade, AZEERA is continuing the “local jeweler” tradition with handcrafted custom rings that are made personally for our clients. Browse our existing designs for a fully customizable garnet birthstone ring or chat with our founders about your ideas for a brand-new and totally unique design.