The world of gemstones is a fascinating area of study that is as infinite and endless as the physical gemstones in existence. Since the dawn of humanity, ancient gemstones have formed part of medicine, lore, and religion in every culture on Earth, and our understanding of their properties and significance only continues to evolve.

Join us as we take a look at ancient and sacred gemstones in some of the oldest and most influential texts known to man.

Pliny the Elder: The Natural History

One of the most famous works from the Roman Empire is the Naturalis Historiae (Natural History) by C. Plinnii the II—also known as Pliny the Elder. In this 37-volume collection, Pliny describes all manner of natural phenomena, including astronomy, anthropology, pharmacology, and ancient gemstones (mineralogy).

In the two final books of this magnum opus (volumes XXXVI and XXXVII) Pliny describes the properties and uses of crystals and minerals that were known and used in the ancient world. For example, he notes that fluorspar was used to make vases and ornaments and rock crystal was carved into vessels and implemented for daily use. He also notes that harder gems such as diamonds were used for scratching other gemstones and testing their relative hardness. This system of testing ancient gemstones appears to have been a precursor to the modern Mohs scale that was introduced in 1812.

The Book of Exodus in the Hebrew Scriptures

In the book of Exodus in the Torah, Yahweh, the God of Israel, speaks to Moses at Mount Sinai and gives him detailed instructions about his design for the tabernacle and the priestly garments to be worn by the high priest Aaron and his family.

As part of this description—found in Exodus 39:2-21—the artisan known as Bezalel is instructed to make an ephod (like a vest) for Aaron with onyx stones on the shoulder pieces and a breastpiece with 12 ancient gemstones—one for each of the 12 tribes of Israel. The names of the tribes were to be inscribed on the onyx stones (six names on each) and also on the 12 gemstones to be carried over the heart of the high priest as he fulfilled his duties in the tabernacle.

The 12 Gemstones on Aaron’s Breastpiece

While it is difficult to know exactly which ancient gemstones were being described in this passage—and this is still a subject of scholarly research —the JPS 1917 Tanakh translates the four rows of gemstones in the following way:

In the New King James translation, carnelian is rendered “sardius,” smaragd is rendered “emerald,” carbuncle is “turquoise,” and diamond is listed in place of emerald.

The 12 Gemstones in the Christian New Testament

Chapter 21 of the book of Revelation describes a New Jerusalem as seen in a vision by John the Apostle on the island of Patmos. In this description, the walls of the city are made from jasper with foundations of 12 different types of gemstones (possibly the same ancient gemstones mentioned in Exodus—though translation difficulties make this hard to ascertain). In order, the 12 gemstones mentioned in Revelation in the New King James translation are: jasper, sapphire, chalcedony, emerald, sardonyx, sardius, chrysolite, beryl, topaz, chrysoprase, jacinth, and amethyst.

Precious Stones in The Quran 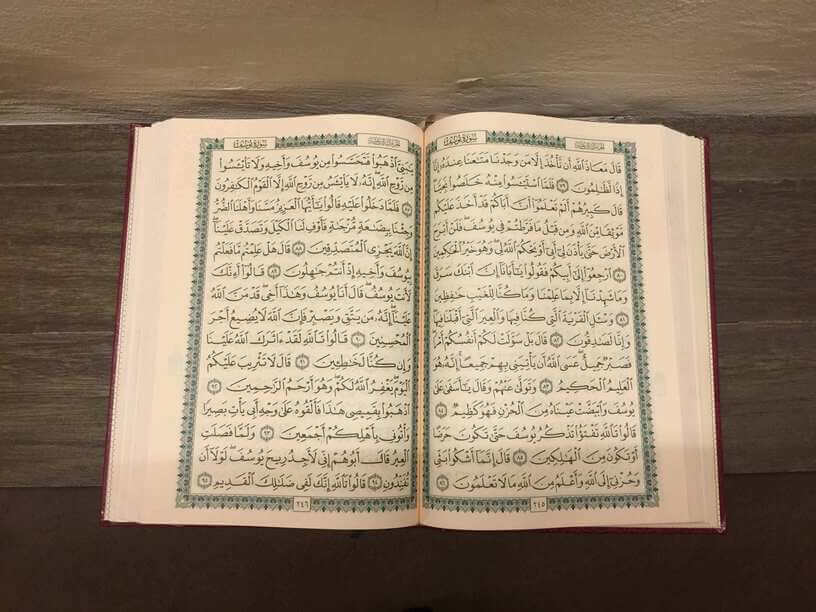 The Quran, the holy book of Islam, contains several references to ancient gemstones that are thought to be representative of the blessings of Allah to mankind rather than carrying any intrinsic meaning as sacred gemstones.

The ancient gemstones and minerals mentioned within the surahs of the Quran are:

Sound like a great place to spend the afterlife? But wait—there’s more. According to Muhammad’s Journey to Heaven, the sixth level of the seven heavens described by the prophet is said to be made of the ancient gemstones garnet and ruby. This follows five prior levels made from silver, gold, pearls, white gold, and another level of silver. The seventh heaven is said to be made of divine light that is so dazzling that mortal man cannot comprehend it.

Gemstones in the Hindu Puranas Scriptures of Puranas

The Puranas, dated between the 3rd and 10th centuries of the common era, contain Hindu literature on a broad range of topics, including myths, legends, and genealogies. Ancient gemstones are mentioned a number of times in Garuda Purana Achar Kanda, chapter 68 (“Agastya Samhita”) along with techniques for testing them for genuineness and rules for their use.

In this chapter, readers are instructed to collect gems carefully, including emeralds, diamond pearls, crystal, coral, and blood stone. Gems are also described as providing atonement for sins and protecting the wearer against poison and snake bites. Contrary to popular culture, women are advised against wearing diamonds. According to this sacred text, diamonds are sacred gemstones that can make women infertile and unhappy!

Not so much a sacred text as an ancient place of pilgrimage, the Vajrasana (“diamond throne”) is a low platform that is located in the Mahabodhi Temple of Bodh Gaya. This platform is situated in the exact spot where Gautama Buddha was said to have achieved enlightenment and is believed to hold the strength to withstand the forces that are released during the battle for the enlightenment of others.

While the name implies that the throne is constructed from ancient diamond gemstones, this platform is actually made from polished grey sandstone and displays intricate carvings of plants, animals, and geometric patterns.

If you or a loved one would like to have your very own ring set with ancient gemstones, consider ordering a custom ring from AZEERA. We offer a wide variety of gemstone rings that can be set with your choice of:

Alternatively, contact us via our live chat or request a callback from our founders to discuss your design idea for a ring with sacred gemstones that would be meaningful for you.